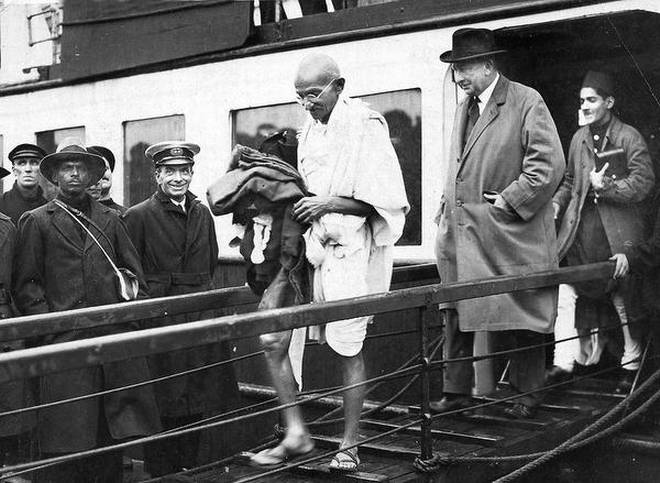 When Gandhi went to England in 1931 to attend the Second Round Table Conference, one of his close aides suggested that he retreat for the weekend to Oxford in order to reflect on the “big questions of principle involved in negotiations”. It would also afford an opportunity to have informal, relaxed conversations with some British statesmen. The philosopher, A.D. Lindsay, Master of Balliol College, extended an invitation which Gandhi accepted. He reached on October 26 with his secretary Mahadev Desai, son Devdas, his English disciple Mira Behn, and his friend C.F. Andrews. To ensure his safety, he was escorted by a large detective, who seemed even larger in contrast to the diminutive Gandhi. Whether or not he performed his other duties, I do not know, but he sure brought a goat from a nearby hill when the master was unexpectedly asked if the college served goat’s milk. The goat, tied to a tree in the college’s main quad, came in very handy. Gandhi was spared from going out of the college and allowed to sit on the floor in his room to have his usual diet of milk and fruits.

The Mahatma found time to address all of Oxford’s 50 Indian undergraduates, most of whom turned up in Indian clothes, including some women who sat spellbound in resplendent sarees. A few who came in Western attire made sure they wore an Indian turban. “Among students, I always feel at home because I am a student,” Gandhi opened his address. “If you begin by cross-examining me, we shall know each other better. Will you please make yourself thoroughly at home with me? I am not a geological specimen.”

The first question to him was on the future of women in India. “The future of the women in India is that they will be equal in every respect to men, if not superior,” he said. He answered questions about separate electorates for Muslims and the ‘untouchables’. He was asked about his views on the creative power of socialism. Without batting an eyelid, Gandhi replied that “it might be a creative power if it did not depend on force”. An Englishman asked if he believed in the good faith of England. Gandhi answered that he had good faith in England to the extent that he believed in the good faith of the human race. He went on: “I have definitely come to the conclusion that the total sum of human energy must be directed for the good, otherwise the world would have been destroyed long since. As a consequence, I trust England, although I have been bitten so often, not once but many times. I expect that the English nature will be converted one day and will respond”.

The Oxford Mail reported that Gandhi was struck by the beauty of the little town and on his way to the poet Edward John Thompson’s house, he got off the car several times to admire its towers, spires, bridges and college quadrangles. Later, Gandhi met visitors at the the Master’s lodgings (Lindsay’s home) at Balliol that included Madan Mohan Malaviya, Sarojni Naidu and several British parliamentarians. Also among the visitors was Lindsay’s son, a tutor in Wales, who ventured to ask with some hesitation: “People want to know, how far are you a Christian?” This clearly meant how far Gandhi had travelled from Hinduism towards Christianity. Gandhi, always quick-witted, even clever but also wise and truthful, adroitly sidestepped this question. He deliberately took it to mean something quite different: How far had he, Gandhi, followed the teachings of Christ? How deep had he dug and how much higher had he gone by following the example of Christ? Just then the senior Lindsay himself entered the room. “Well, here is your father, could he tell how far he is a Christian. He will not be able to tell you and neither am I,” Gandhi said.

For Gandhi, each of us must truthfully answer how far we have achieved spiritual growth or self-perfection. In saying this, Gandhi communicated two central points of his ethical and religious thinking. First, the futility of conversion, an act which assumes that a person belongs exclusively to one or another religion, never to both, and that he should belong to a religion superior to all others. Gandhi rejected the idea of intrinsic superiority of one religion over another and the imperative of constricted, exclusive belonging. Second, the importance of multiple attachments. If, as he believed, the whole point is to dig deeper and go higher, then why can’t a Hindu follow the teachings of Christ? Why would that be inconsistent with the true teachings of Rama, Krishna, Buddha, Nanak or Kabir? Why should anyone by restricted to a single source of inspiration?

To his Christian friends he seemed to suggest that men and women can find the resources of self-realisation, to work out salvation from within their own tradition, that no need exists to change mere labels. To people more generally, but particularly to fellow Hindus, he seemed to say that no religion can bind him absolutely. Indeed, on some issues, his own views were too closely interwoven with Christianity to be entirely Hindu and too deeply infused with Hindu and Jain ideas to be called Christian. Although Gandhi died a Hindu and remained unflinchingly so while alive, he probably exemplified the spirit of Christ more than any other man of his times. One might say, as the philosopher Margaret Chatterjee reminds us, that he responded to the teachings of Christ because he found confirmation in them of what he received from his own multiple traditions.

A friend of Lindsay told him that he should not think of Gandhi as a saint trying to be a politician but rather as a politician trying to be a saint. But both he and his wife were convinced that having Gandhi as their guest was like having a saint in their house. The one facet of Gandhi that utterly impressed Lindsay was his conviction that nothing could be God’s will if it was not understood by ordinary, unlettered people. It is often thought that for Gandhi, social transformation can be brought about only by a change in the moral character of every individual person. While Gandhi undoubtedly stressed the need for self-transformation, it is absurd to conclude that for him collective action was relatively unimportant. One of Gandhi’s great contributions to social and political thought is that an enormous creative power is released when ordinary people of good will — without the trappings of power, wealth or fame — come together. Such solidarity can offer the most effective resistance to unjust exploitative social practices and political tyranny. The power to transform the world flows from the collective non-violent energies of ordinary men and women, a lesson that the high and mighty, steeped in social orthodoxy or propelled by authoritarian instincts, ignore at their peril.

Vaping is injurious to health